Hello our valued visitor, We present you the best web solutions and high quality graphic designs with a lot of features. just login to your account and enjoy ...

Unifying a disparate peace-time economy was not easy and complicated by having to deal with so many disparate entities from within countries, sectors, industries, corporations, organizations, institutions, and groups. This included Allied countries versus those within the British Empire; civilian versus military and intelligence organizations; the public versus private sector; commercial versus academic organizations; and industrial production of basic commodities versus armaments. In addition the UK was the most industrialized country in the world, but it was also over-populated. Almost all raw materials except for coal were imported including wood, oil, and two-thirds of the food. A war economy would have to be run like a supply chain, where everything from raw materials, to production, to distribution would be carefully managed.

To enable the transformation of fighter production and the UK economy Churchill needed a governance framework to sustain this over many months. It would require a collection of people and resources that had the legitimacy and authority to take actions needed to ensure the transformation was swift and managed effectively. They had deal with adoption, selling the nation, and build plans to overcome barriers to a successful transformation.

Churchill’s disparate organizations consisted of government, military, and civilian groups. These had unique cultures, were well-organized and highly institutionalized structures, and used to working in their own ways. The armed forces had evolved independently, without a need to interface with each other, and had even created their own lexicons. The Royal Navy considered itself unique, and was reluctant to closely cooperate or share resources with the British Army and Royal Air Force. After Dunkirk each arm of the military jockeyed for more resources. Even the Air Ministry chiefs saw the answer in producing more bombers in preference to fighters. Logic had to prevail as both the army and navy would be ineffective without adequate fighter air cover. More importantly Churchill had to break down the barriers between vertical organizations and vertical operations and reconstruct them to work harmoniously together. Churchill started the process by incorporating the command structures of the military into his command center at Storey’s Gate. 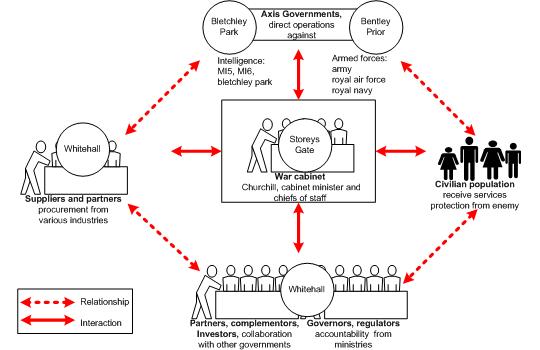 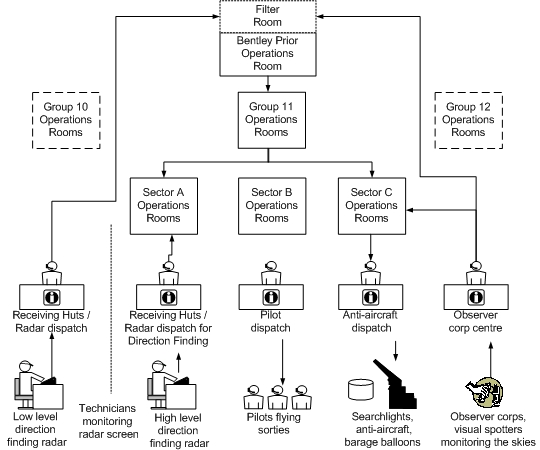 One of the critical success factors of the early warning system was to scramble and position fighters with three-minutes of warning. However, to do this each fighter was dependent on a service-delivery chain of providers each delivering its service in a predefined window. For example, radar had 10 minutes, observers had 2 minutes. For weeks each provider independently refined and tested its provisioning of service to meet its set target. Precious seconds were reduced across the whole service-delivery chain refining the fighter-scramble service levels. The overall early warning system was critical as it preserved precious fuel stocks by maximizing fighter time on the ground and by targeting them accurately at enemy planes. 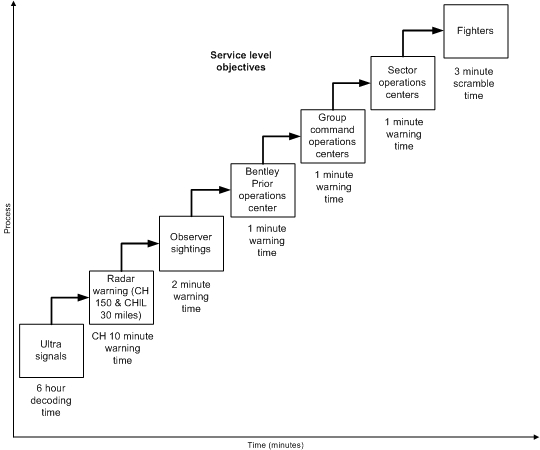 The air battle intensified in July 1940 but the RAF held its own in initial skirmishes. The true potential of the Adaptive Enterprise started to become very apparent as it responded to various attacks. As fighters were scrambled to a precise position at 20,000 feet to meet the on-coming raids, other defense systems like anti-aircraft were carefully coordinated to maximize the overall response. Fighters did not waste time searching for the enemy, instead preserving fuel and maximizing the number and effectiveness of sorties. Effectively, this small fighter force, through targeting and flying several sorties a day, appeared to be much larger than it actually was.

At Storey’s Gate a sophisticated Map Room was created for Churchill and chiefs of staff that served as an executive dashboard. It tracked real-time events from Bentley Priory and other theatres of war, and key performance indicators from the supply-chain. In the Cabinet War Room Churchill and his chiefs collaborated to make decisions. The facility was equipped with good communications to quickly cascade actions out to the hierarchy of military, industrial, and civilian establishments. It was the heart of a real-time decision-making environment fed by intelligence gathered across the organization. 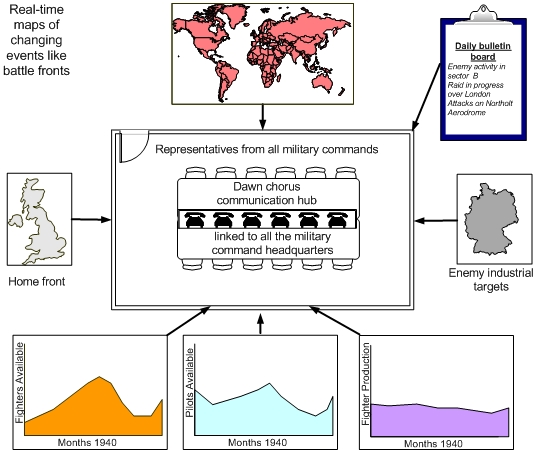 Storey’s Gate became the center of the whole operation. From here the government followed the air battle, closely monitored the supply-chain, and kept track of events from other battle fronts. Based on accurate and timely information and intelligence, Churchill and his organization were better able to understand what was going on in the broader picture of the war. They were better able to leverage all the resources at their disposal, select the best tactics, and also the most promising strategies and projects. Churchill, empowered by what was effectively the “Adaptive Enterprise”, delivered his most rousing and memorable speeches in the nation’s “darkest hour”, as he refused to surrender. 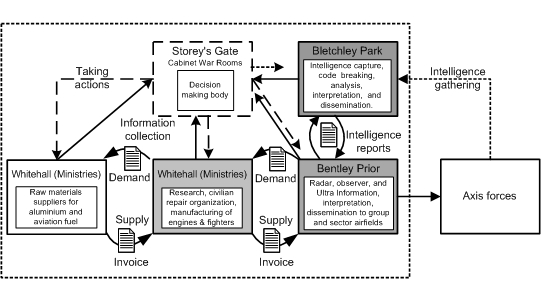 In the Heat of Battle

By mid August 1940 the Luftwaffe, expecting a short air battle, was surprised at the resilience of the RAF and opted to draw out RAF fighters by increasing the number of its fighters in a raid, and by also targeting known fighter bases. The RAF was only 24 hours from total defeat but through Ultra intelligence the RAF learned of enemy intent and successfully avoided an all out battle of attrition that the Luftwaffe was looking for.

The sophisticated recovery network through the CRO collected downed pilots and destroyed fighters. In workshops these wrecks were cannibalized for parts to keep existing fighters going. In such a lean operation, even enemy planes were recycled and cast into smelters to provide raw materials for new fighters. The whole supply-chain held absolute minimum inventory to maximize the number of fighters available.

The Adaptive Enterprise synchronized the whole supply-chain to meet fighter losses with replacements delivered on a daily basis. By the end of August, 1940, fighter production hit an astounding figure of 496 per month, a 250% increase.

The Outcome of the Battle

In the final outcome, RAF fighter command intelligently picked its battles and was able to meet incoming raids with just the right number of fighters, carefully preserving its resources. By the end of September, 1940, Luftwaffe pilots, having been told continuously that the RAF was “on its last reserves”, become completely demoralized as the RAF was still able to meet each raid and fighting ferociously. With the Adaptive Enterprise not only was the air battle won and an imminent invasion staved off, but the groundwork was laid to eventually defeat a much more powerful military opponent. The economy was moved to a new level where it could sustain total economic warfare. The Adaptive Enterprise pulled various military, industrial, and civilian establishments and communities together into a federation working towards a common cause. Most significantly, all this took place 65 years ago.

Churchill’s Adaptive Enterprise was successful beyond expectations. So what made the solution so successful? A lot of the credit sits with the leadership of Winston Churchill. He listened to his experts, and together they made the right decisions related to the use of technology. The Adaptive Enterprise was standardized, simplified, and modularized making it agile and maximizing the utilization of its assets.

As today’s organizations move towards an Adaptive Enterprise using emerging technologies, many of the challenges are the same. They need to be stable enough were the IT infrastructure is an enabler to the business. They must sense changing situations and respond to these rapidly. They must understand the impact of business events in real-time, compare these against various scenarios, make sound decisions and take actions to counter competitive threats. They need to be agile enough to anticipate market conditions and customer needs, and react to business events. Through recent advances in emerging technology large organizations can become more agile and mimic the characteristics of a small organization.